The trolley track hoist is the type of hoist most commonly used by built-up roofing crews. Trolley track hoists come in two sizes designated by one manufacturer as the TT400 and the TT1000. These two numbers indicate the maximum weight capacity (in pounds) of each hoist. 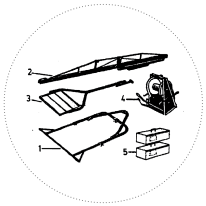 Both sizes of trolley track hoists have five main components: 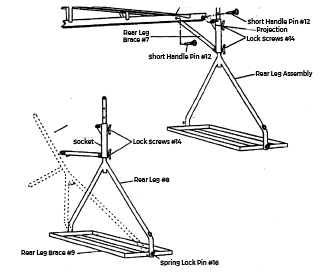 The instructions for assembly, operation and dis-assembly the typical Trolley Hoist brand shown in the attached illustration read as follows:

NOTE: If not using the track at its maximum working height insert Pin above socket on rear leg. The trolley rail should be slightly lower than the rear leg to facilitate pulling loads. 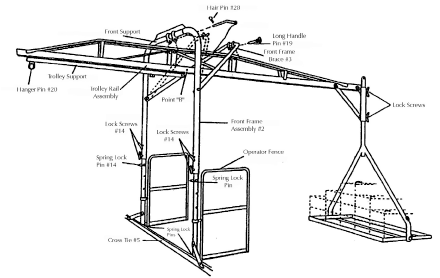 Once the trolley track hoist has been assembled and moved into place, attach a hoist wheel and rope to Hanger #20 at the end of the trolley support. Lock the trolley out by putting pin #12 through the rail at Point “B”. 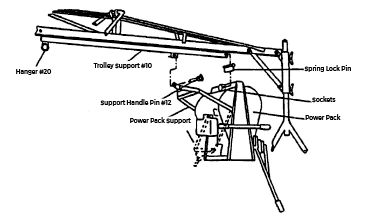 Carefully lower the power unit to the roof.

Before mounting the power unit, ensure that the trolley is rolled to the back of the hoist and locked in place with a pin through Point “B”. This will ensure that the trolley is stable during the mounting procedure. The power pack unit can weigh between 92 kg (203 lb) and 100.6 kg (222 lb). Depending on the model being used it may require as many as four persons to lift the unit into place.

The power pack unit is equipped with three handles that control the lifting and lowering of the loads. The handles are locked into an upright position against the frame of the power unit for shipping. The handles can be placed in any of three positions and locked in place using a clip pin, for the convenience of the operator. 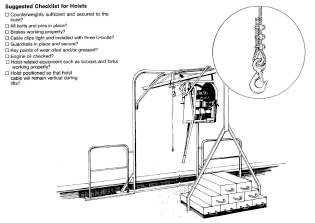 Before the hoisting operation can begin the engine should be started and allowed to warm up.

Move the entire hoist back away from the roof edge.

Carefully move the individual sections over the roof edge and deliver them to the ground.

Ensure all personnel involved with hoisting wear head and hand protection at all times.

Before lifting a load, make a “dry run” to ensure the hoist is operating properly and you are familiar with the controls.