Roofing and waterproofing membranes are used on decks as barriers to moisture entry into the spaces below. Both share some similar functional requirements, but others are quite different. For optimal performance it is important to understand the different loads and stresses waterproofing systems are exposed to when compared to roofing systems.

Waterproofing can be defined as the treatment of a surface or structure to prevent the passage of water under hydrostatic pressure. The non-exposed waterproofing membrane is used to protect walls, floors, and tunnels below grade from ground water and to protect spaces below plaza decks that are on or below grade. It is also used to isolate wet spaces, such as shower stalls and mechanical rooms from other areas of the building and to contain water in pools, planters and trenches.

Water lying on or against any surface exerts pressure, which increases in direct proportion to an increase in depth. Water has a unit weight of 9.8 kilonewtons per cubic metre (62.4 lb/ft³). Water exerts force and pressure against the walls of a container, be it the vertical walls or horizontal floor. There is a difference between force and pressure. Pressure is defined as the force per unit area. In SI units, pressure is expressed in kilopascals (kPa) and in imperial (U.S.) units it is usually expressed in pounds per square inch (psi) and 1 kPa is equal to 0.145 psi. One pound per square inch (6.8 kPa) is approximately equal to 2.31 ft (0.7 m) of water height (column of water), no matter how big around or square the column is. One foot (300 mm) of water height is approximately equal to 0.434 psi (3 kPa).

The hydrostatic head to which any structure is subjected to affects the rate of moisture penetration. The most effective means of waterproofing any structure is the removal of the “head of water” by providing drainage. When this cannot be accomplished, waterproofing is required to prevent moisture entry. The waterproofing system selected needs to be capable of withstanding all the anticipated loads that will be acting upon it.

Waterproofing may also be used to treat an exposed surface to prevent the passage of, and deterioration from, water into or through an underlying structure (typically concrete) without the presence of hydrostatic pressure. These surfaces are generally designed for pedestrian or vehicular traffic such as parking garages and bridges. The waterproofing may be exposed, and act not only to prevent water transmission, but also serve as a wear and traffic surface. These surface waterproofing membranes must, similar to roofing membranes, be UV resistant and withstand varying environmental conditions. Surface waterproofing membranes are designed with specific performance properties in mind to address a range of applications resisting abrasion from pedestrian or vehicular traffic. For structures below grade, the shear action of the water and the soil should be considered in addition to hydrostatic pressure. Adequate protection must be provided against the combined thrust of water, soil and shear action. The significance of these forces can be understood by calculating the force exerted by a column of water. The thrust at the bottom of a 20 ft (6 m) column is approximately 8.7 psi (60 kPa). It should be remembered that pressure in a continuous volume of water is the same at all points at the same depth and the pressure at any point acts in all directions at the same magnitude acting equally vertically against a slab or horizontally against a wall.

Another force affecting waterproofing below grade results from freezing of the ground water. Heaving soil can cause a shear action against the foundation and the waterproofing membrane protecting it. Waterproofing membranes are designed to prevent the ingress of water. They are not expected to resist the considerable loads they may be subjected to without adequate structural support. The waterproofing needs to be fully supported and in intimate contact with the structure to which it is attached. Any voids between the membrane and the supporting structure are locations of weakness that can adversely affect performance. Full adhesion will also limit moisture migration should a breach in the waterproofing occur.

2. The waterproofing needs to perform in a constantly wet environment.
Depending on the amount and level of water in the ground, the waterproofing membrane can be in constant contact with ground water and wet soil. Roof systems, if properly constructed with adequate slope to drains are usually only exposed to water for a short time. In addition, the hydrostatic pressure that they are subjected to is much less than that experienced by waterproofing membranes. Even a ponded and poorly drained roof with 2 inches (50 mm) of surface water is only subjected to a pressure of approximately 0.07 psi (0.5 kPa).

4. The waterproofing barrier needs to resist construction abuse.
Unlike roofs, waterproofing membranes typically do not have to be protected from foot traffic. However, they should be protected until excavations can be backfilled, or until the wearing course and overburden is applied. During backfilling, gravel, debris and other sharp materials may be dumped against it. Although horizontal decks are usually covered with a protection course, the most common damage results from the use of the waterproofed deck as a staging area by other trades. Although roofs are also prone to damage “by others”, it is more critical for waterproofing because of its inaccessibility.

5. The waterproofing needs to be able to accommodate some movement in the substrate to which it is attached.
Concrete walls and floors may experience settlement and shrinkage as it cures. In addition, decks may experience thermal movement and load deflection. The waterproofing membrane should be able to bridge small cracks and resist rupture from thermal expansion and contraction to some degree. It should be noted that the amount of movement anticipated in waterproofing is significantly less than one would expect in roofs. For this reason, properties such as extensibility and tear resistance may not be as critical in waterproofing applications as in roofing.

Waterproofing is usually below grade and in an environment where temperatures are relatively constant. Unlike roofs, the ambient temperature to which they are exposed to does not fluctuate diurnally and seasonally. Since they are usually buried, they are not exposed to the deteriorating influence of sunlight, precipitation and wind erosion. 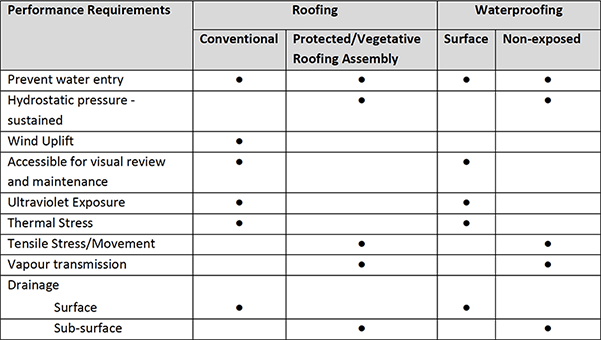 It is imperative that designers, architects, and contractors understand the differences and similarities between roofing and waterproofing to ensure that the proper system is installed because some materials are designed to function under either condition.

The opinions expressed herein are those of the CRCA National Technical Committee. This Advisory Bulletin is circulated for the purpose of bringing roofing information to the attention of the reader. The data, commentary, opinions and conclusions, if any, are not intended to provide the reader with conclusive technical advice and the reader should not act only on the roofing information contained in this Advisory Bulletin without seeking specific professional, engineering or architectural advice. Neither the CRCA nor any of its officers, directors, members or employees assumes any responsibility for any of the roofing information contained herein or the consequences of any interpretation which the reader may take from such information.