Expansion joints are structural joints in a building that are required to control the stresses in the structure due to changes in dimensions, changes in temperature and sometimes moisture. You can tell if a joint is an expansion joint by the fact that it runs through the entire structure, starting at the foundation and continuing up the walls, through each floor and finally the roof. It is the responsibility of the structural engineer or designer to determine where the expansion joint should be placed, and the size of the opening.

Joints are typically constructed of wood planking and cant strips. It is the roofer’s responsibility to ensure that it is properly flashed and roofed in, using only the materials specified that will accommodate the expected movement. Joints must always be constructed so that they extend at least 200 mm (8 in) above the finished roof surface.

There are four steps for constructing an expansion joint as follows:

Roof area dividers serve a number of purposes in a roofing system including:

Roof area dividers should be constructed in each of the following locations:

Roof area dividers are usually constructed of wood planking and cant strips and like expansion joints, must extend at least 200 mm (8 in) above the finished roof surface.

There are two major steps in the procedure for constructing a roof area divider. These are: 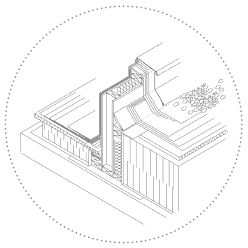 Roof curbs are raised members that are used to support roof penetrations, mechanical equipment, skylights and roof hatches. Curbs must be constructed for all types of roof openings and on both insulated and un-insulated decks.

The curbs constructed on un-insulated decks are 50 mm x 200 mm (2 in x 8 in) square boxes. There are 3 major steps in the procedure for constructing a curb on an uninsulated deck as follows:

The curbs constructed on insulated decks are normally 50 x 200 mm (2 in x 8 in) square boxes. The major steps in the procedure for constructing a curb on an insulated deck as follows: 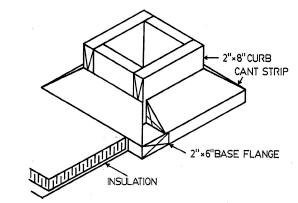