Specialty fasteners are often used in wall applications with variations in substrate type. The first thing to consider, when choosing a fastener is the type of wall or substrate it’s going into.

Two additional considerations determine your choice of fastener: the weight of the fixture you’re hanging, and the type of load it presents. A light load is under 5 kg (11 lb) (such as picture frames, pin-up lamps, metal soap dishes) while a load of 10 kg (22 lb) or more is heavy. A shear load is one which exerts a straight-down pull (such close-to-the-wall items as mirrors or wall clocks) while combination loads exert an outward pull as well (shelves, cabinets) and require stronger anchorage. Dead loads, where the pull is constant, require less anchorage than shock loads, which must withstand sudden impact or increased weight. Vibration loads (such as air conditioners) call for special treatment – usually a fastener that can be re-tightened.

Note: When in doubt, use more fasteners and/or a heavier-duty type. Over fastening cannot hurt, but under-fastening can be disastrous. Where the fastener must pass through the mounting plate you must add that thickness, too.

In hollow walls, a poured concrete wall or block wall, you want a fastener that passes through the plaster or drywall face (or the wall of cinder block or hollow tile) and spreads out to anchor against the back. 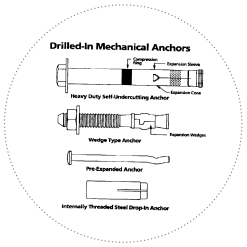 In solid walls or substrates, you want a fastener that holds by expanding against the sides of the hole you sink it into, whether in concrete, brick or stone. There are a great number of products and devices used to fasten or anchor in solid materials. Some examples are nails, glue, anchor bolts, powder-driven fasteners, welding, etc. Our main concern is the types of anchors used in concrete, block, brick, or stone.

The traditional method of fastening or anchoring to concrete has been to cast bolts in it. Anchor bolts are embedded in the concrete with some device to prevent their turning or withdrawal. The most common type is the fixed anchor bolt.

Another type is the flexible anchor bolt which allows some adjustment of the anchor bolt when setting structural steel. This type is placed inside a pipe sleeve approximately double the bolt size. The whole assembly is embedded in the concrete.

Another method of anchoring to a parapet or foundation is to drill a hole in the concrete larger than the diameter of the anchor. The anchor is placed in the hole and then grouted in place. Pouring grout in the hole around the anchor seals it in place.

The “cast in place” or “grouting” methods are considered by many to be the most secure means of anchoring. They are also the least costly. The disadvantage is that once cast in place they cannot be moved, so extreme accuracy must be observed when they are set at time of pour. If there are any errors or changes, the anchors will be useless as they will not be in the correct position.

Concrete inserts are used when it is not practical to install anchor bolts. These devices are installed before the concrete is poured. They may be used in foundations or concrete walls. They must be designed to prevent withdrawal when the anchor bolt is tightened. The most practical use is when you require a flush or smooth finish and you are required to attach a fixture or machine.

There are two types of expansion anchors: those having external threads protruding from the surface of the concrete (known as male anchors); the type having internal threads are known as female anchors.

This is most critical in the performance of the anchor. This is the minimum depth to which the anchor must be installed. If the anchor is installed at less than minimum embedment, it will not perform satisfactorily. The two things that must be considered in anchor embedment are:

At minimum embedment, the anchor fails because the forces on the concrete radiate in a cone at a 45º angle from the point of anchor expansion. At this minimum depth of embedment, concrete resistance to rupture is less than the ultimate failure load of the anchor and concrete spall occurs.

At slightly deeper embedment, the tensile capacity increases but the pull-out action remains the same. Also, a larger cone of concrete would spall with the anchor. At a point of deep embedment, anchor failure is probably due to the anchor breaking or pulling through the expansion device.

Another factor to consider in anchor performance is the on center spacing of the anchors. If two anchors are placed too close to each other, the holding power of both are diminished. This is caused by overlapping of the individual forces of each anchor. From the drawing, the distance “A” should be greater than or equal to 2 times the distance “B”.

This is also a factor in edge spacing. If the anchor is placed too close to the edge of the concrete, reduced strength and failure of the anchor may result.

Male anchors are self-drilling and do not require carbide bits. This type of anchor is not used very much anymore as it is hard to drill the hole. It is much faster to pre-drill a hole with a carbide bit.

Self-drill anchors should not be installed in holes drilled by carbide bits. They will not hold their design capacity.

Lag shields may be used in concrete. They have good holding power, are easy to install and are inexpensive.

First select the proper sized shield. Mark position of anchors in the mortar, stone, masonry, block, or concrete the shield is to be fastened to. Make sure the correct length for the substrate is selected. There are two classes available (long and short). The short shield is for hard masonry or concrete and the long shield is for weak masonry, brick, block, etc. Drill the hole using the correct bit size (stated on shield). Set the anchor by inserting the shield, then inserting the lag-bolt into the shield. The anchor expands as the lag enters the shield.

Lead anchors are used to attach materials to concrete, block and masonry. These fastening devices use wood screws which are set into a lead shield.

Select the proper anchor and screw. Screw length should equal length of fastener plus 6 mm (1/4 in). Drill a hole using the correct diameter bit. The hole should be 6 mm (1/4 in) deeper than length of anchor. Set the anchor flush with surface. Insert the wood screw into anchor and tighten screw. The anchor expands as the screw is tightened.

Fibre, nylon and plastic screw anchors are similar to lead anchors and are installed in the same way. They are particularly useful when fastening into hollow walls. They are available in screw-type or nail-type. In the nail-type, a pin is factory set into the anchor. Impact from a hammer will expand the shield.

Self-threading and self-drilling concrete screws are also available. They are screwed into a pre-drilled pilot hole.

Chances are, if you stay in this business long enough, you will encounter just about everything, and very often it will be new to you. However, the basic principles of fastener application will still be the same.