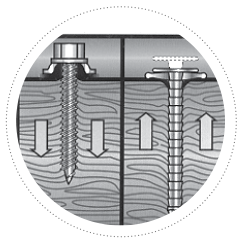 There are various types of screws with different shapes of heads and screw slots available.

Flathead screws are used in applications where the head must be flush with the surface or slightly below it. Both slotted and cross-slot types are available.

Two-thirds of the screw should penetrate into the piece that the screws are gripping. In hardwoods a pilot hole is drilled first to prevent the wood from splitting. To produce a pilot hole for the screw, hold a bit up to the screw. It should be the same size as the shank of the threaded part (called the root). You may make the pilot hole smaller or eliminate it entirely when fastening into soft woods.