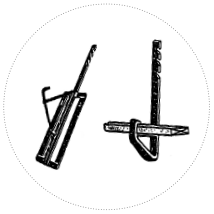 Sometimes crawl boards or roof ladders are used on steep roofs as well. These devices must be securely fastened over the ridge of the roof. Never use the eaves trough to support a roof ladder.

Another popular roof jack is the solid 38 mm x 189 mm (1 ½ in x 7 ½ in) jack that allows you to slip in a 38 mm x 189 mm (1 ½ in x 7 ½ in) board. These jacks are built so that the board is perpendicular to the roof, thus allowing the roofer to walk on the flat part of the board. Don’t use a board that is too long. Handling a long heavy board may be unsafe on a steep roof. Note: These types of jacks may not meet the requirements of the applicable provincial Occupational Safety and Health Act. 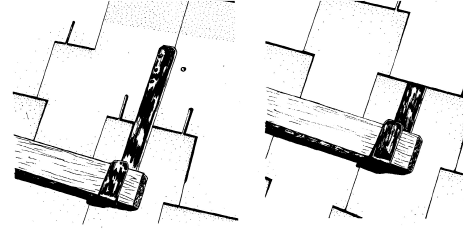 The roof jack should be positioned so that you can easily lay a shingle over it. Always use long nails to anchor roof jacks and make sure that these nails hit something solid. When you finish with the roof you should start at the top and remove the jacks in the opposite order that you installed them. With the jacks, you can remove the board and with your hatchet, tap upward on the bottom of the jack until the jack falls free. For a smoother roof, it is a good idea to raise the tabs covering the jack nails and drive the nails down flush.

Which roof jacks you use will vary depending upon what is available in your area and what is needed on your particular job. But don’t try to get by with inadequate jacks. Select good straight grain lumber and test every board before using it. If you use boards over 3 m (10 ft) long, you should install an extra jack in the middle of each board.

Remember that you will probably have the extra weight of a bundle of shingles on the board. Be sure to not overload any one scaffold board.