There are several types of ladders which every worker should be familiar with: 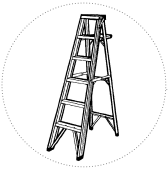 Step ladders are available in a wide range of sizes, styles and materials. These types of ladders are self-supporting, which means they can stand without leaning against another structure and must be placed on firm, level surface.

A step ladder is hinged at the top and can be folded flat for easy transport. When in use, the step ladder must have its legs fully spread and the “spreaders” at each side must be locked to prevent the legs from opening or closing.

When working on a step ladder, one must never stand on the top two steps. Also, the fold- down tool shelf near the top of the ladder must not be used as a step.

A single ladder or plain rung ladder is a non-self-supporting ladder that is non-adjustable and consists of one section.

An extension ladder is similar to the single ladder (or plain rung ladder) except that it is made in two or three sections joined together in such a manner that one section can slide over the other. When extended to the desired length, the upper section is supported by brackets which rest on the rungs of the lower section.

An articulated ladder is a ladder with one or more locking hinges that allows the ladder to be set up in several different configurations including single or extension.

A combination ladder is a ladder that can be used as a step, single or extension ladder.

A job-made ladder is customized to fit specific job situations and are temporary. The primary purpose is to provide proper access to a work area. A job made ladder must follow local OH&S construction guidelines

Any single or extension ladder must be equipped with a non-slip type of base, or must be held, tied or otherwise secured to prevent slipping.

The base of an inclined portable ladder should be approximately 1/4 the height of the ladder from the base of the wall. The height is measured from the ground to the point at which the ladder contacts the wall or building.

Regardless of the type of ladder being used, there are precautions which must be observed: