Propane is liquefied by compressing and/or cooling propane gas and placing it in metal cylinders or tanks designed for that purpose. The compression rate of one litre of liquid propane produces approximately 270 litres of propane gas. This explains why so much energy (BTU’s) can be contained in a small cylinder and why safety procedures must be followed so that this energy source does not become a hazard to workers.

Propane is packaged in a number of storage containers and sizes to meet a variety of applications.

The pressure within the container varies depending on the outside temperature. The pressure increases as the temperature rises causing an expansion of the liquid. For this reason, containers are never fully charged with liquid, but have a vapour space at the top of the tank to allow for normal expansion. It is illegal to fill propane cylinders or tanks to more than 80% capacity, allowing room for the volume changes due to temperature variations.

All propane cylinders are equipped with the following: 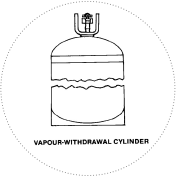 Containers for vapour-withdrawal service are usually 45.4 kg (100 lb) capacity or smaller portable cylinders. Unlike the liquid service cylinders, they have no dip tube. Only vaporous gas can be withdrawn.

The main service valve on vapour-withdrawal cylinders has a female outlet connection with a left-hand (POL – put on left) thread and a safety relief valve set at 2585 kPa (375 psi). Vapour- withdrawal cylinders may not be equipped with an excess flow valve.

Except for vapour-withdrawal cylinders designed for horizontal use, all propane cylinders should be transported and used only in a vertical position.

Most roofing kettles and tankers are designed to work on a liquid withdrawal system. 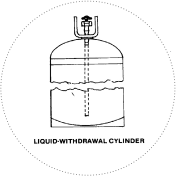 Containers for liquid-withdrawal service are usually 45.4 kg (100 lb) capacity, portable cylinders equipped with a dip tube and main service valve. The valve has a left-hand (POL) thread male outlet connection so that it cannot be inter-changed with cylinders for vapour-withdrawal service.

Each cylinder is equipped with a safety relief valve set at 2585 kPa (375 psi), an excess flow valve to stop the flow of propane in case the outlet nipple breaks, and a tag or other means of indicating that the cylinder is for liquid-withdrawal service only.