Water can sometimes get into the wrong place in buildings as a gas, an invisible gas that can move through many building materials that may be impervious to water as a liquid. Water vapour is one of the several gases that make up the air around us, and a certain amount of it is necessary for life and comfort. We are often only aware of its presence in the air, when it changes back to liquid as condensation on windows, walls and ceilings. This can cause bad problems, but at least you can see it. Sometimes, however, the gas can turn back to water within a wall or roof where we can’t see it.

Water vapour can be carried into the building construction by two mechanisms, diffusion and air leakage. Diffusion refers to the flow of water vapour through materials as a result of a vapour pressure difference across the material. Any air vapour mixture at a particular temperature and humidity will have a particular pressure and the pressure will increase as the mixture is heated and decrease as it is cooled. Since there will usually be a difference in temperature and humidity between the two sides of a building construction or building material, there will also be a difference in air and vapour pressure.

Air leakage is the uncontrolled movement of air through walls and roofs, both into the building (infiltration) and out of it (exfiltration) as a result of air pressure differences. These air pressure differences can be produced by wind, chimney effect, and the operation of mechanical ventilating systems. There can also be an interchange of the air from the building with the spaces that may exist within walls and roofs.

of water vapour into walls and roofs is the provision of a vapour barrier as close to the inside surface as possible. Since some of the more severe problems of condensation may be due to air leakage it is obvious that the continuity of the vapour barrier to also provide an air barrier is very important. This may be the subject of a future bulletin, and this bulletin deals mostly with vapour flow by diffusion.
The rate at which water vapour will flow in this way is dependent on the magnitude of the pressure difference, the length of the flow path, and the resistance of the material to flow.

The vapour flow resistance is indicated by its permeance or the ability of the material to permit vapour to flow (in a similar way to heat flow and heat resistance).

The unit of permeance is called the “perm”, which is defined as one grain of water passing through one square foot of material in one hour under the action of a vapour pressure differential of one inch of mercury. There is an important difference between permeance and permeability, although both words are often used indiscriminately.

Permeance refers to a specific material of a particular thickness, and is the term used in relation to vapour barriers.

Permeability refers to one inch thickness of a material, and the unit naturally is the “perminch”, and this is usually used for installations.

It is important to note in relation to insulations that unless there is a skin or membrane surfacing, the resistance of the material to water vapour flow is provided by the thickness, and it is not quite fair to compare this to a membrane type material. In addition, of course, a membrane type barrier is usually reasonably continuous, while insulation is discontinuous at joints which in most wall or roof applications are fairly frequent.

The permeance of materials is determined by a standard test method, in this country usually by ASTM-E96 for vapour barriers and ASTM-C355 for insulations. It is important to realize that these tests can be carried out by several different procedures, and comparisons of different materials may not be valid unless the test procedure was the same for all materials being compared.

The general method is to seal a sample of the material over the top of a metal dish (referred to as a cup) which is then placed in a cabinet maintained at 50 percent relative humidity. The cup may contain either a desiccant which provides 0 percent relative humidity or it may contain water which provides 100 percent relative humidity. In the first case, (dry cup) the material separates two atmospheres at 0 and 50 percent, and moisture diffuses into the cup to cause a weight gain. In the second case, (wet cup) the material separates two atmospheres of 100 and 50 percent and moisture diffuses out of the cup to cause a weight loss. The change in total weight is taken as the vapour flow through the sample. It is found that the permeance of many materials increases at the higher humidities, and designers must bear this in mind when comparing or selecting materials for the conditions involved. The usual temperature for the tests is 73.4°F, but it should be noted that 90°F and 100°F are used is some test procedures and this also would have an effect on the result obtained. Note also that the test results applies to a sample of material, and not to the material in place on the job, where joints may be involved.

Under such test conditions the following values might be obtained for some commonly used roofing materials: 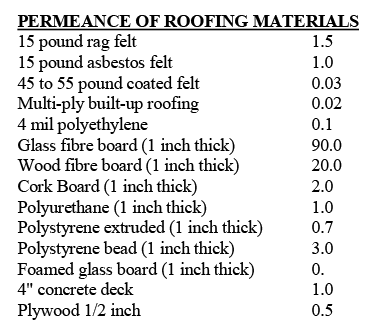 (Note that for the insulations these could be stated as Permeabilities in perm-inches since permeability refers to one inch thickness).

As you can see from the above, vapour diffusion is a relatively slow process. A good continuous vapour barrier can reduce the rate of diffusion to a very low level. For this reason, the CRCA Specification Manual recommends the use of an adequate vapour barrier for all roofing systems.